By Sarah Hillesheim on December 27, 2010 in Isabel

I got this email from Isabel last week. (Sorry to say it has taken me until now to get this ready to post.) Next week I hope to post something about her mother’s 90th birthday party. So much has happened in Chile since Isabel has been visiting there…This is a highlight of her trip:

Today I went with Lori (the Executive Director of the Isabel Allende Foundation and Isabel’s Daughter in Law) to visit one of our Foundation´s pet projects: Un Techo para mi País. It means Roofs for our Country, but I am afraid the soul is lost in translation. Please check it out. You won´t believe what these young people are doing:
Techos was founded in the late nineties by a charismatic priest, Felipe Berríos, who wanted to build houses for the poor. He probably never imagined that his dream would catch fire and in little more than a decade the organization would eliminate the slums in Chile. The devastating earthquake in February left thousands of people homeless.  In just four months, however, Un Techo built more than 24,000 emergency houses. Nowadays Felipe Berrios is working in Burundi among the poorest of the poor, while another priest, Cristián del Campo, has taken his place. (What is it about the Jesuits that they recruit so many handsome dudes?)  Un Techo has grown and expanded; now it operates in 19 Latin American countries, with hundreds of professionals and more than 200,000 volunteers, mostly students. The main cause of poverty in Latin America is not lack of resources but injustice: few people have too much and many people have too little.
Un Techo para mi País is solving the housing problem for millions of people. It empowers homeowners, builds communities, and also offers young students—who will eventually be in government and public service—the opportunity to learn about the hidden reality of their countries.  Most of us, especially the young, want to do good, to serve, to help, but are too busy or too lazy to pay attention to that longing in our hearts.  I was blown away by the energy, passion, commitment, and joy of those young people, not to mention the fabulous work they are doing.  I wish I were 50 years younger!  And I wonder why on earth my own grandchildren are not working with a hammer and a saw in some remote village, instead of texting about the hotdog they had for lunch.
Love Isabel 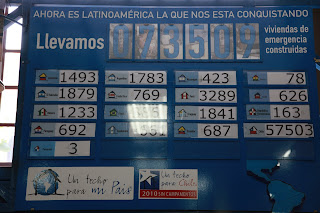 This photo above shows number of temporary houses built for the homeless. 33,000 of the 57,503 built in Chile were built in 3 months after the earthquake. All by volunteers! 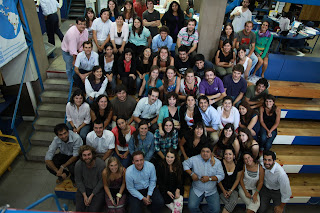 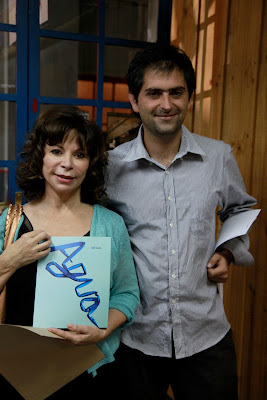 This is Luis Ortiz. He was so pleased to be able to give Isabel HIS book instead of vice versa–it’s an amazing project he created.

View all posts by Sarah Hillesheim →
In Chile It Is Summer
Happy Birthday Panchita!

4 Responses to Saving the World vs. Hot Dogs